lucky said:
I don't think he will fck with the dragons. Too strong. Maybe sansa. But I'm thinking someone weaker on the water like dorne. Cersei knows they killed her daughter right?
Click to expand...

yea could be dornish people.. sand snakes or w/e..but wouldn't it have to be something that euron would know about? like tyrion was convicted of killing joffrey, for instance.. public knowledge she wants him etc.. but yea i didn't think of that

He is going to try and take out one of her many enemys. Could be anyone. But I would think he would choose an easier target than the dragons.
faded

First episode was meh.. can kinda see where it's all going

Hoooooly fucking shit. S7e2 was amazing. The whole thing. It was already amazing before the climax scene. Everything.

-Varys and olenna dropping some knowledge on daenerys

-arya finding out about jon moment

-nymeria moment (tho not sure what to make of that one)

Could go on and on. What'd I miss?

Arya "that's not me"

Arya to nymeria "come be my dog again"

Nymeria walks away with her pack

Arya realizes "that's not you"

Arya "that's not me"

Arya to nymeria "come be my dog again"

Nymeria walks away with her pack

Arya realizes "that's not you"

Yeah it was pretty good. even grey worm got some action

marzwoody said:
Yeah it was pretty good. even grey worm got some action
Click to expand... 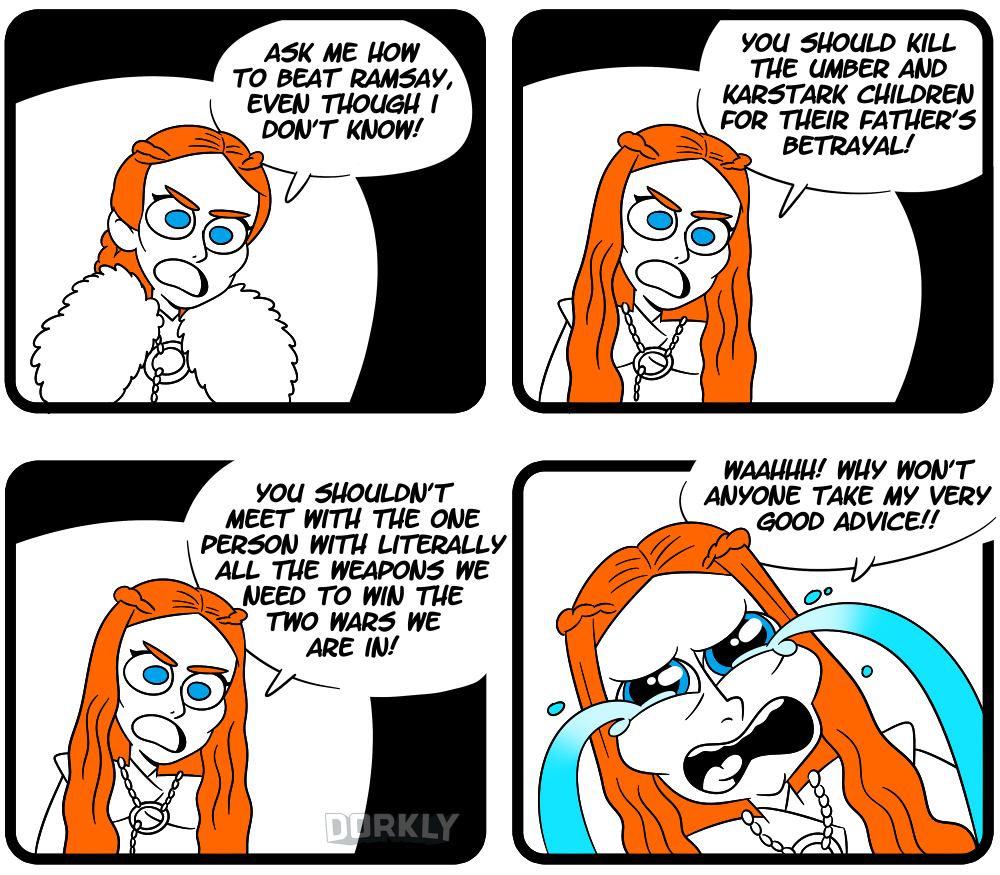 First 40 mins or whatever were a little bit of a letdown. In particular the cave drawings... Yeah that battle scene was incredible.

sooo much intrigue going on. so many chars meeting up and loose ends finally being tied up (i.e. gendry, i.e. the hound, etc)

two big theories i have: (i have not watched ANY trailers and have discussed with no one, curious to see if others have come up w/the same conclusions)

1: littlefinger. MY MAN littlefinger! (if unaware, plz know he's always been my favorite character, heh). so here's my theory. i paused it on the scroll arya read.. it was the scroll that cersei forced sansa to write to robb in season 1. the scroll basically says:
"robb, King robert baratheon is dead, ned tried to steal the throne, come bend the knee to joffrey"
-sansa

so i surmise that littlefinger knew arya was up to no good (working against him) and knew she was following him. so he wanted her to find that specific letter so that he could create a wedge (or further one) between the sisters and get her out of the picture

2: cersei isn't pregnant. she made it up to get jaime to stay on her side cause she needs him (for the time being, until she has the chance to backstab daenerys etc etc. maybe jaime finds her used westerosi tampons or something later and that drives him to kill her (which is obviously a longstanding theory that he'll become the queenslayer, be the "younger brother to kill her" prophecy etc.

oooooh. i know why they had that scene with "annulment" definition scene.

Cant wait for someone to kill the heel of the show, Danyearus

Beelzebubzy said:
Cant wait for someone to kill the heel of the show, Danyearus
Click to expand...

Staff member
If Arya falls for that she's a dummy. Should be seeing that shit a mile away with Littlefinger.


Also, anyone else thought the plan of going to catch a white walker may be the stupidest thing in the literal universe? Jump on the back of a dragon, fly up, boom booom 500k Zombies, aight im convinced. Or take the dragon, grab a couple and show them to Cersei.

Risking the life of the King in the north for that plan? C'mon now.... Even further, don't the zombies pretty much hang out together at all times? Are they just gonna sneak up behind them and grab one?
Balli'n Balon Greyjoy comin' fo' dat Iron Throne, boy.