Who knows what judges have. But I definitely dont have Porter up 5 rnds to 1
faded

Ah fuck me. Weird ass stoppage. Bud was landing big tho I guess.

Staff member
I had Porter up by a few rounds at least until he got caught. Can't wait to see the cards to see if it was fair. 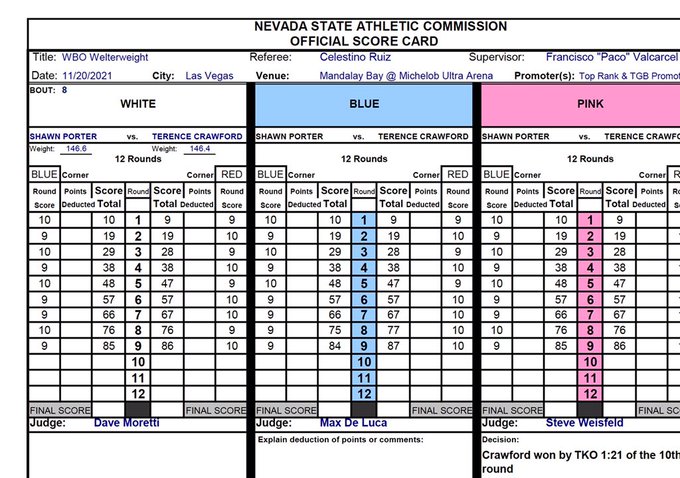 Staff member
Took Bika at +100 and Vera at +125.. I know Paulie happened, but no way the boxers don't have a large advantage here...

Though is in a fucking triangle? Who knows how that will affect things
Balli'n Balon Greyjoy comin' fo' dat Iron Throne, boy.

Mirinquads said:
Took Bika at +100 and Vera at +125.. I know Paulie happened, but no way the boxers don't have a large advantage here...

Though is in a fucking triangle? Who knows how that will affect things
Click to expand...

Mirinquads said:
was some strange openers
Click to expand...

Yea, they lined em as if they were mma fights. Rule set seems to favor boxers. 7 rounds should reduce variance. Probably tons of value on all the boxers.

Staff member
This "Vanilla Gorilla" Samuel Crossed is fighting Badou Jack at cruiserweight tomorrow in Dubai. Look at this guy in his last fight, a six round majority draw against a bum. Okay he's knocked out a bunch of tomato cans and has technically never been stopped, but he looks like he's moving in slow motion in this recent fight video and gets hit sometimes too. I don't care that Jack hasn't gotten such a fast KO in years. This is a showcase fight to get Jack a title shot at cruiserweight according to the pre-fight media. Hopefully Jack sparks this dude out instead of wanting to get some camera time in front of the fans. I'm taking the under 3½ at + money.

Jack looks in good shape and doesn't look undersized against Crossed with his new curly locks either: