This card is also the start of the 16-man Featherweight Grand Prix: 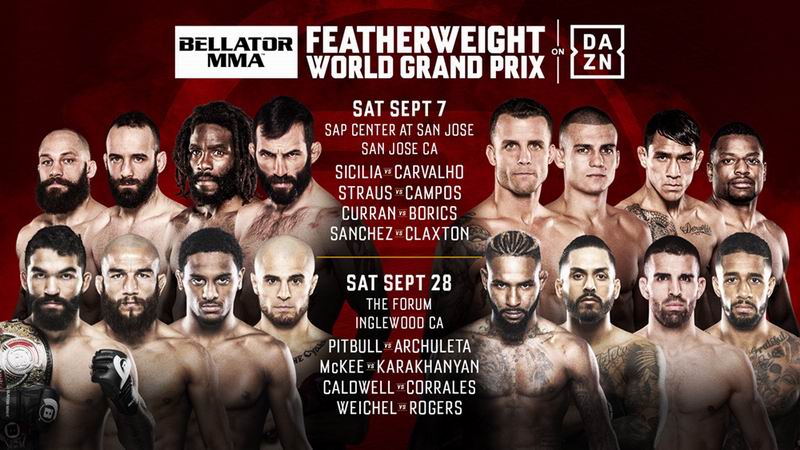 Bellator 226 Ceremonial Weigh-in from this evening:

After watching some tape on this Borics kid, I'm sold on him. I think he's the real deal, has a good head on his shoulders, smart kid, usually makes good dec's in there. Also he's young and improving, whereas Curran has been around forever and has a ton of miles on him. I remember him knocking the shit out of Mike Ricci years ago, damn time flies. Anyway Borics gets a bit sloppy w/ his stand up, esp his boxing but he seems to be more than legit and possibly and elite fighter to me and only getting better. On him for 3u as a small fav. I hope I don't look like an asshole if he loses but will eat my crow as always if he loses.

Also took Sanchez @Mirinquads it could very well be a trap but Sanchez is always gonna bring it. Great chin durable as hell, underrated grappler, solid on the feet altho he might not want to stay there long. Idk I like him to get it done, he's faced some of the best comp Bellator has to offer and has always been a game opponent. Also we'll see how Claxton's gas holds up, one Dec win, fighting a guy with an iron chin, this fight might go deep and Sanchez might grind him down. Sanchez cardio always been legit, if he can make it a cpl mins into the second rd then Claxton might just slow hard, who knows, but it's a legit possibility. Fuck it, I put 2u on him again as a slight fav.

Also the under for the Bolanos fight for a cpl units, he should murder this guy, total showcase here. And have a bet on Carvalho to finish Sicilia, he's younger, hungrier, and more skilled, pretty big fav for a reason. He could ko or sub Sicilia imo and prob will. I think Sicilia's chin is fairly weak and he's washed and never been that good in the first place.

Lastly on Straus by stoppage as well. I think that's one of the more underrated lines here, Campos is tough but Straus underrated hands, his left is nasty and we've seen Campos lit up and ko'd 2 of his last 3 fights and lost a Dec to the washed up human can that is Sam Sicilia. I really hope I don't look bad if Sicilia wins, I'll look worse than his hairline if that happens.

Needed that, got my ass handed to me on the ufc card, pretty much killed this one except for Straus who seemed to hurt himself right off the bat. That's what I get for betting on some guy whose body is put together with super glue. Also was way of on the Bolanos under but thank God the guy can't grapple for dried dog shit, so even when we lose we win sometimes. The other guys did what I needed em to do. That Borics kid is my boy now. Love that dude. Anyway head is killing me, I think I might have a concussion, shit got crazy last night, but fuck the er b/c FOOTBALL!!!!!!! Also if you think about it if I do have a concussion then it's only appropriate I watch 10 nonstop hrs motherfuckers getting their heads blown out like the Zapruder film. Foootballl!!!!!

Gaston Bolanos getting submitted was a big upset and it was really sad to Daniel Straus' body give up on him. Another controversial foul in a Bellator main event ends in a No Contest. Net result was 3.5 units profit.

Everyone who skipped the Bellator postlims missed one of the most brutal leg breaks in MMA history:

JimGunn said:
Everyone who skipped the Bellator postlims missed one of the most brutal leg breaks in MMA history:

Dayuuumm his fucking leg went to jello bro. Just like that tall black dude who broke his leg in half years back, he was on tuf iirc, he's dead now I think. What tf was his name?

BT said:
Dayuuumm his fucking leg went to jello bro. Just like that tall black dude who broke his leg in half years back, he was on tuf iirc, he's dead now I think. What tf was his name?
Click to expand...