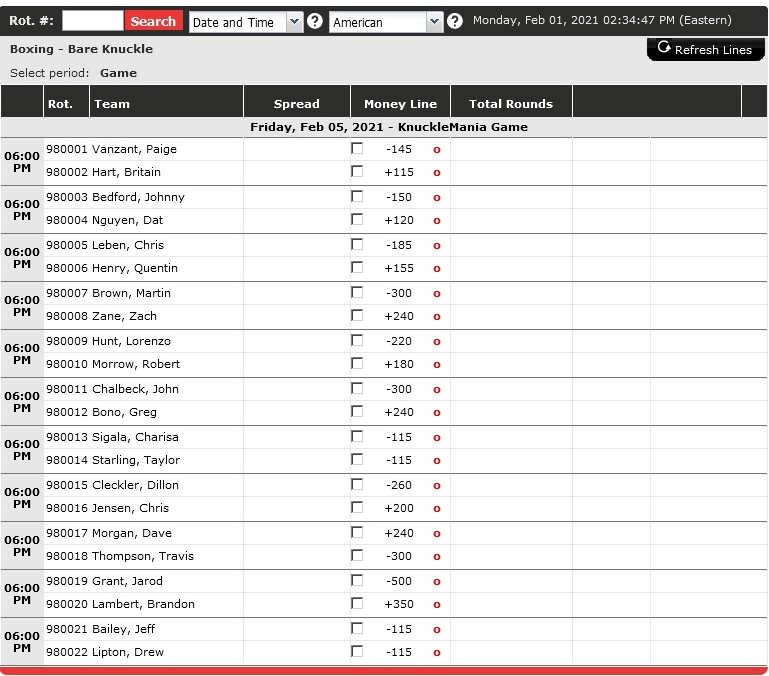 hmm, line is pretty stagnant. would think the name value would tilt action in favor of pvz, but since it hasnt, i'm led to believe sharp money is on not-pvz.

pvz -115 ... might buy out, or maybe just leave it and if it loses that means she'll be doing pron next. win-win in other words.

I'm on Britain Hart as an underdog against PVZ. She's fought in pro boxing and bare knuckle multiple times so has the experience advantage. She's scrappy but not a great technical boxer, however neither is Paige to be fair. Britain left home and went to California for a training camp just for this fight. Paige is training at ATT with great training partners herself and is tough but I'm going with the girl who has fought bare knuckle before and got cut and bled and is really motivated to get a big win against her spoiled popular opponent.

Have to back Johnny Bedford as an underdog to defend his 135 pound belt vs Dat Nguyen. He's the most experienced bare knuckle fighter in the promotion, undefeated in BKFC with multiple stoppage wins, and is much taller, bigger, longer, in excellent shape and confident. I respect Dat's pro boxing experience and he does have some nice punches himself so he's a worthy challenger. I think it will be an exciting fight.

Also backing hard hitting Quentin Henry as an underdog against Chris Leben in his retirement fight. Quentin has a knockout even at heavyweight in BKFC and is the younger man against the UFC veteran in Leben who wants to go out on a win in this 205 pound bout. How often does that retirement fight go well for the old vet?

King Mo trained muay thai and lethwei fighter Brandon Lambert is a whopping +3xx dog against very impressive Jarod Grant who has two wins by KO in BKFC. I have watched multiple interviews with Lambert talking about his training for this bout and he's pretty confident for this 135 pound bout. Lambert is much taller and longer, and even though I haven't seen him fight, I'm taking a flyer at big odds. All BKFC fighters are still in single digits for bouts so really wide lines are not warranted for complete unknowns in most cases imho.

The only -2xx favorite I like since I have watched him multiple times in BKFC is Lorenzo Hunt. He moves very quick for his size and has KO power, winning three of his bouts by KO and only losing once to the talented Gustavo Trujillo. His opponent Rob Morrow for this 205 pound bout lost by 35 second KO to the very same opponent in his only bare knuckle bout. So I think Hunt is a justified favorite in this one.

Staff member
What books have lines ?

Staff member
I want to fade leben and paige

If anyone is willing to book my action i will cut you in 5% winnings and cover any transfer fees.

Will said:
What books have lines ?
Click to expand...

BetOnline, 5dimes, Bookmaker, Bovada, Bet DSI, Sportsbook.ag, BetPhoenix all had lines. May or may not still have since the prelims started.

Staff member
oh yeh. i have BP. i will check now.

Staff member
got them. Shit odds though ;/